Leasing is increasingly becoming a popular and better alternative option to drive a car for a few years with low monthly installments compared to purchasing. There are plenty of car lease and financing deals from many manufacturers for cars, trucks and SUVs. The automaker firm, Chevrolet and General Motors are popular for their low prices, which translates to big savings, attractive specials, and incentives on their selection of vehicles. This year’s Chevy specials are not disappointing. If it is your favorite auto company, below is a synopsis of Chevy Tahoe Lease Deals for 2020.

When it comes to leasing, even experienced car buyers get confused. This is due to the seemingly complex leasing terminologies. Like Chevy Bolt lease deals and Traverse lease deals, it is important to check and ask several questions before leasing the Chevy Tahoe and other premium models. If you are an expert with car leasing, you shouldn’t worry about getting a good deal.

Apart from Chevy Tahoe, Chevrolet has a wide array of lease deals, including the Equinox lease deals. Both vehicles don’t differ much in the design but offer varying functionality. Before settling on Tahoe, it is important that you search widely for the various available Chevy lease deals. Make a choice based on the cost of the deal, suitability to your needs, average monthly premiums and vehicles’ ease of maintenance.

This year’s Chevy Tahoe is a good SUV choice, but with limited cargo space. Therefore, those looking for spacious Chevy vehicles should consider getting Truck lease deals. They offer much cargo space with similar performance and functionality. That said, check out 2020 Chevy Tahoe advertised lease deals below.

The 2019 Chevrolet Tahoe lease is in the upper half of SUV rankings. The vehicle boasts of a powerful engine, comfortable rife, and above-average reliability rating. However, it has quite a small cargo space for the class. This makes it a good family car option due to the 9-seater capacity. As for cargos, the Chevy trucks are a better option. 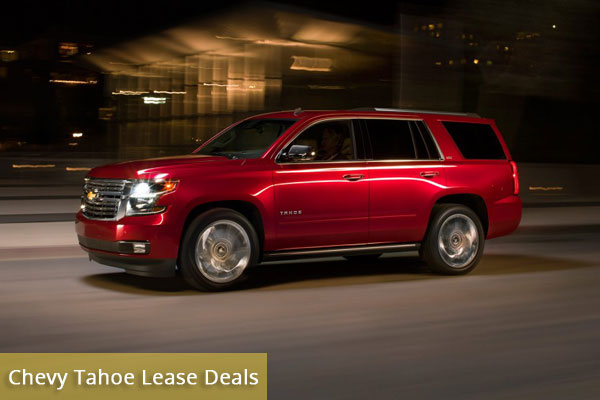 The Chevy Tahoe lease options are not far from other Chevy SUV lease options. This is probably because of the slight difference in the vehicles’ performance, engine capacity, trim, and size. Nonetheless, the 2019 Chevy Tahoe is a good SUV, especially those looking for up to 9-capacity passenger vehicles with a V8 engine. Below are some of the Chevy Tahoe feature highlights.

Before settling for the Chevrolet Tahoe lease option, you should consider how the car performs. Well, the model comes with a 5.3-liter V8 engine with a seamless six-speed automatic transmission. This mishmash gives the car a quick acceleration in various driving situations. With the V8 engine, the Chevy Tahoe achieves approximately 15 miles per gallon on countryside roads and 22 miles per gallon on highways. These are overall average figures for any large SUV.

Considering the safety of a vehicle is of utmost importance, especially if you are looking to lease a family car. According to the National Highway Traffic Safety Administration, the Chevy Tahoe has an overall safety rating of four out of five. The car earned three stars in rollover assessment, four in crash test and five stars in side crash test.

To attract more customers and Chevy lovers into purchasing or opting for Chevy Tahoe lease deals, manufacturers fitted an exciting interior. To begin with, as mentioned, the vehicle has a capacity of nine people. It comes with standard seating for eight people, with two front bucket seats and bench seats in the second and third rows. The first model has a first-row bench that increases the capacity of the vehicle to nine.

To suit family functionality, the vehicle comes with three complete latch car seat connectors on the vehicles seat second row and upper tether anchors on the third row. The anchors are easy to access and connect. That aside, you will enjoy the infotainment, navigation, and Bluetooth functionality of the vehicle. It comes with an 8-inch touch screen, quick response time, smartphone integration, standard six-speaker audio system, HD radio, and much more.

Which is The Right Model for You?

The Chevy Tahoe model available for various Chevy Tahoe lease deals is in three trims. The trims include Chevy Tahoe LS, LT, and premier. Most shoppers prefer the LS trim due to its solid 5.3-liter engine, six-speed automatic transmission, front-wheel drive, and other features. You shouldn’t be swayed by the wind. Check out the LT and Premier models for better comfort features and strong 6.2-liter engine options.

Starting at $53,000, you get to enjoy the additional Enhanced Driver package, heated front seats, a power liftgate, leather upholstery, and much more. Manufacturers and lease agencies offer varying Chevy Tahoe incentives and lease deals for this model.

As mentioned, the leasing process can be confusing even for expert vehicle buyers. Whereas there are many intrigues in a lease agreement, there are key elements that indicate how good the lease is. By asking the right questions, you can accurately evaluate the lease deal. Below are the key questions to ask before signing up for a Chevy Tahoe lease agreement.

Are there lease specials?

Most manufacturers frequently offer discounted leases to boost their sales. Lease specials offer a good way for prospective customers to save. You should check the fine print for any additional expenses. The monthly installments quoted should not have additional sales tax and registration fees. Some lease deals also charge high drive-off fees.

What is the vehicle’s residual value?

To begin, a residual value is the cost of the vehicle after the lease. This is an essential figure to a lease agreement and usually expressed as a percentage to the vehicle MSRP (Manufacturer Suggested Retail Price). The main reason why this figure is important is that it determines the cost of your lease payments. The higher the residual value, the lower the monthly payments, and vice versa. Once you lease a vehicle, you will be paying off the difference between the residual value and the capitalized cost.

How many miles does the lease allow?

You will come across various lease deals with varying capitalized costs, money factor, monthly premiums, and, most importantly, mileage. This is why reading the fine print of the lease deal is essential. Before signing the deal, ensure that the lease allows for enough miles. Lower mileage leases can be increased, but with additional payments. This is better than paying an extra fee at the end of the lease period.

What fees does the deal have?

Prospective leasers looking for a good lease contract should consider the fees included in the lease contract. All lease contracts have disposition and acquisition fees that cannot be negotiated. There are tweaks that can convince the dealer to waive the initial deposit. Lease fees differ from one dealer or bank to another. Even though some cannot be negotiated, it is important to know what you are paying for instead of being surprised at the end of the lease period.

Chevy Tahoe lease for this year offers great deals and discounts for Chevrolet enthusiasts. Before signing a contract, look at the fine details to get a good deal. Avoid leasing this model if you want to drive inexpensively. Leasing offers low monthly payments, which can be enticing, but the high-interest rates and high fees can take a toll on your credit. If you cannot afford the monthly payments, consider getting a used or getting a basic Chevy model.

You will also be a bad candidate for leasing if you drive a lot and drive in poor conditions. This is because you will incur additional fees for the extra mileage and poor maintenance at the end of the lease. This makes the entire contract expensive. Besides, consider the manufacturer’s or dealer’s financing options available. This can ease payment processes.

Hello Reader, I am Rajib Mozumdar and I am a Professional Blogger. This site goal is all about automobile accident law, insurance, donation, finance, reviews. I hope you get the best information.