Automotive dealerships today are commonly offering car leasing as one of the options to financing or traditional auto purchase. Initially, businesses would use leasing when obtaining company vehicles since most individuals were predominantly financing or buying autos, with some renting cars for $300 monthly. With various leasing alternatives available today, including sign and drive lease deals. Which most consumers are finding to be an excellent option to drive a new car with no cash when signing.

While leasing often costs less than buying, it comes with a few restrictions, such as non-customization agreements and mileage limits. The limitations usually determine whether buying or leasing is a better deal for individual shoppers. The recent boom in automakers and car brands accessing the US market is seeing dealerships competing for the same car leasing customers. The availability of last minute car rental sites makes it easy for shoppers to hire vehicles in emergencies, which further increases the accessibility of cars in the market.

Car dealers have to provide different lease payment structures catering to their customers’ needs. Some shoppers are okay paying upfront costs when buying the car; some have a pre-determined amount of the total they want to pay upon signing. While others do not want to pay anything when hiring, which brings us to the most popular option: sign then drive deals. In this article, we are going to address sign and drive auto leases as a neat and clean way of getting on the road without breaking the bank.

You are probably asking yourself, “What is a sign and drive lease?” A sign and drive car contract is among the most popular pay structures with lessees. Because it allows them to drive off in a brand new vehicle without spending a penny at signing, hence the name sign and drive deal. You will find the same offer going with the name sign then drive specials.

The primary benefit of this type of pay structure is that it does not carry a significant upfront cost when picking up the new car from your dealer. While sign and drive lease deals are a favorable scenario for plenty of reasons, they are no more than driving off in a brand new vehicle without spending a cent. Note that it does not mean that the costs due at signing will disappear. 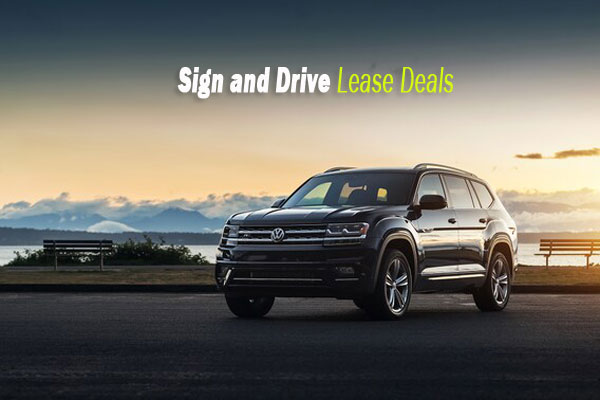 Auto dealers roll the costs into your monthly payments, which they divide by the number of lease payments you have to make, hence significantly raising the price of monthly installments. For instance, if lease payments are $321 per month before including upfront costs over a three-year term, and owing $2200 in other fees plus taxes that are rolling over into monthly payments, you will be paying a higher price of $382 a month for the same duration.

From the above example, there is an increase of $61 in monthly installments, which might be more than your monthly budget for the car lease. For that reason, sign and drive lease deals have the potential of making inexpensive monthly leases a bit pricey and leave you with an unaffordable vehicle on a month-to-month basis. Alternatively, you might want to sign for one of these $99 car leases.

The right type of lease deals depends on a few factors like your down payment, sales tax, total lease price of the vehicle, and an assortment of other fees. In the case of a sign, then drive deals, your financial standing, as well as credit history,  are the most essential, as they also determine if you are eligible for other arrangements such as no money down leases.

Consumers with poor to average credit are unlikely to qualify for the sign and drive lease deals. However, car dealers may not offer any discounts for those offers. Nevertheless, you do not have anything to worry about if you are looking at stellar credit history. Banks often see less risk in loaning more money to customers with solid credit scores. Also, auto dealerships will readily sign you up for the best financing offer.

For that reason, even if the sign and drive deal is the most attractive option and you have set your mind on signing one, you still need the lender’s approval before moving forward. Nonetheless, with the lender’s endorsement, it is an excellent choice for potential lessees, to which most car shoppers end up choosing.

If making monthly payments more affordable is your primary objective for car leasing. But you have less money to put down at signing, then you should consider no money down lease deals. Read on for more information on $0 down deals.

The majority of car shoppers confuse no-money-down leases with the sign and drive lease deals. While the two contracts may sound similar, there are vital differences worth noting. Zero down lease deals or only $0 down deals refer to leasing a vehicle with no down payment. Please note that just because the advert says zero down does not mean the money due at signing will be $0. The truth is that you will still be covering the first month’s payment along with the DMV, bank charges, tax, and acquisition fee.

No money down leases could potentially mean paying thousands of dollars out of pocket upon signing, based on the cost of the vehicle. In contrast, sign and drive carry the benefit of waiving all these fees, without which you will be paying no penny when signing the deal. Getting the two payment structures confused can prevent you from making accurate comparisons.

Why Choose Zero Down Lease Deals

In most cases, lessees do not want to put so much money down up front for the newly leased vehicle. Because they will be returning it to the dealer in about two or three years. As a result, most dealerships advertise car prices with zero money down. Just as with sign & drive deals, this will mean higher monthly costs, which surprisingly provides peace of mind to consumers, as they do not need to give out a lot of money all at once.

While it is more common to see financed vehicles asking for a down payment as opposed to those on a lease. Sometimes putting down money could be in your best interest. If you don’t have extra cash to spare when singing a new contract, making a substantial down payment will reduce the total lease amount you have to pay. Which knocks down your monthly payments. Spending some money up front could be an attractive lease structure. If you are looking to keep monthly costs down while driving a car that you desire.

Attaching a down payment to your contract might help you get approval for a lease if your credit standing is less than stellar.

To help you compare the two lease deals and decide what works best for your situation, check out this table:

Sign then drive leases can make an excellent option if you do not have cash at hand for a new vehicle. Currently,   different sign and drive lease deals NJ special offers are available on various car brands. For example, many Volkswagen models, including the 2018 Jetta, Tiguan, Passat, and Atlas, are on the line up for sign and drive leases in New Jersey. The deals involve zero security deposit, no down payment, and no first month’s payment. The new 2019 Volkswagen Arteon 2.0T SE might be the best NJ sign then drive deal costing $419 per month over 39 months with $0 due at signing.

Not only are shoppers leveraging the zero down offer courtesy of the sign and drive specials. But adding the VW Partner Program incentives on top of everything might help cater to taxes, registration, and title fees to make the deal completely free upon signing.

If you are rolling the costs of car leasing into your monthly payments, ensure you have high credit scores to qualify for the deal. While different car dealers and manufacturers have varying standards. Sign then drive deals in New Jersey have a minimum credit score requirement of about 675.

Sign and drive lease deals are an excellent lease payment structure. If you do not have money to put down at signing, but you still need to pick up the new vehicle and drive off right away. Putting more cash down when signing the car lease will result in lower monthly payments. On the other hand, put no penny down, and you will see the cost of your monthly payments increasing.

Whichever way you want to structure lease payments, each option has its pros and cons. Which ultimately boil down to personal preference, along with your credit and financial standing. For lease deal that involves paying $0 at signing, you should be ready for higher monthly payments over your lease term. Which include taxes and other acquisition fees.

Hello Reader, I am Rajib Mozumdar and I am a Professional Blogger. This site goal is all about automobile accident law, insurance, donation, finance, reviews. I hope you get the best information.